An Interview with Alex Avrio 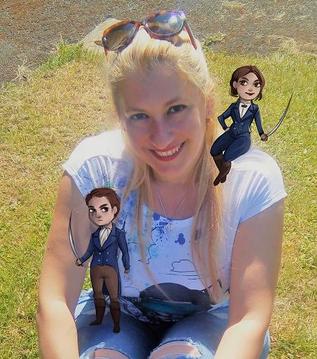 What's the story behind your latest book?

The Alchemist’s Box started as a small exercise in a writing group, creating two people in a certain situation. The two people were so interesting that I wanted to learn more about them. It suddenly fitted in with another idea that had been simmering at the back of my mind, and has now rapidly developed into a fully-fledged novel. The closest I can think to describe it is Sharp meets Supernatural, in a fantasy setting.

Do your stories have an underlying theme?

I try to incorporate a strong sense of adventure into my stories, coupled to elements of dark fantasy, and covering diverse times and places. I think of the underlying theme as "Darkness lurks beneath the surface". They are often set in our world, or a similar world to the one we live in, where people are living normal everyday lives, with normal, everyday problems. But there are unseen dark forces lurking in the background, controlling things, or trying to break through into our world. These unseen dark forces take many forms in my work, but I would say that is my underlying theme.

Tell us a bit about The Alchemist’s Box

The Alchemist’s Box is set in a fantasy world with the culture and technology of the Napoleonic/Regency Period of our world. There are some differences: this is a more egalitarian world where women can join the army or other occupations that were traditionally held by men during that time period. However, women still face problems.

The book starts with Captain Regina Fitzwaters losing a large amount of money at cards. The bosses of Border Town offer her a deal. Do one little job for us and we’re even. What kind of job? she asks. Nothing difficult, just go get something we bought from the Alchemist of Pella, it’s a box, bring it back with its seal intact, and that’s it. Oh, and you’ll have to take Kapitan Maximillian Jaeger with you. Only he fought on the opposite side during the war, and there’s still resentment bubbling under the surface. What could possibly go wrong?

So, what’s in the box? I’d love to tell you more but it would spoil the surprises, and there are many in the book. What are you waiting for? Download it now and join Capitan Regina Fitzwaters, Kapitan Maximillian Jaeger and the Merchant Blades in the adventure of a lifetime.

Do you remember the first story you ever wrote?

I was around 10, and had a half-baked idea about a Lord who was showing a precious diamond to his guests at a party, when the lights went out and the gemstone was stolen. Suspicion fell on his son, who was banished and had to go on a quest to deepest, darkest Africa to make his fortune and find a similar diamond to bring back to his father. It was to be a rip-roaring old fashioned adventure, in the Haggard style, although unfortunately it didn't get past the first few pages.

Do you remember the first story you ever read, and the impact it had on you?

My mum used to tell me stories, and would combine characters in strange mixtures. For example, the Greek heroes would meet Spiderman and Dick Turpin. This was great for igniting the imagination of a young child, and inspired me to want to make up my own stories to tell my mum.

Your writing often contains strong female characters. Why is this?

I get fed up reading the portrayal of "strong" females as nasty, snarky characters, and I try to portray females with a steely inner strength, and the ability to look after themselves, without the need to resort to underhand means. OK, so they may occasionally use their feminine wiles to influence male characters, but this isn't their only way to get what they want. I also try to make them human. They do fall in love, often against their better judgement, and have to deal with the consequences. I don't see this as implying an inherent weakness, or out of place in the genre that I am writing in. At the end of the day, whatever genre, women are women and not two dimensional cardboard cut outs, and I do my best to write them that way, be they heroes or villains .

Tell me more about the romantic elements in your tales.

Romance, love, lust, are all powerful forces in life, that impact all of us, and why should our characters be any different? They are thrown together in all sorts of stressful situations, and bonds of friendship and romance are bound to develop. As in real life, not every relationship turns into romance, with strong friendships more akin to sibling relationships also developing. Some relationships don’t develop and some crumble. I’m a sucker for romance, but if I was allowed to happily pair my characters from the beginning, then it would be a short book indeed.

How do you approach the process of writing?

Usually an idea comes to me from a combination of things that have been bubbling around in my mind for a few days, and I'll wake up one day with everything having fallen into place. Often stories are inspired by things that have happened to me, for example, after an unhappy experience with a door-to-door salesman, I wrote a piece about a similar dodgy character getting his comeuppance through supernatural means.

For larger pieces, it depends. Most of the times, the novel has its own personality and will choose how it wants to be written, seat of pants or detail plotting. Sometimes I write from the seat of my pants. I know many writing instructors tell you not to, but you have to do what’s right for you. So I sit down and my fingers do the thinking. Most times it works very well. Then I go back and iron out any wrinkles at the editing round.

Sometimes after having the central idea I find it very useful to make a detailed plot outline. I have a novel I’m working on which has a whole excel spreadsheet where I check the characters, places and timelines. It’s a bit complex but has to be done. Sometimes, even though I know what I'm intending to write in a scene, the characters take over, and things start to move in unexpected directions. I like to let this flow, as often new plot twists develop from these unplanned developments.

What authors do you admire, and how do they influence your writing?

There are lot of authors I like across many different genres, but ones that spring to mind are Neil Gaiman, Joe Abercrombie, Bernard Cornwell, Jonathan Stroud and Cornelia Funke. On the surface they sound like a mixed bag, but they are authors who write well and tell a good story. I especially enjoy a well written adventure that I can lose myself in. I love the old school adventures of H. Rider Haggard, Edgar Rice Burroughs and Jules Verne, and I find adventures like that are hard to come by nowadays.

What is the greatest joy of writing for you?

Even though it requires effort, to me writing doesn't feel like work. I also love it when people tell me that they've enjoyed my work, and the reactions I get when people draw a breath at the end of a cliff-hanger and say "What next, what next??!!" On a recent long bus journey I was telling my sister the plot of one of my latest stories, and I could see people around listening in. When I got to the climax my sister shouted "No, you can't do that to the hero!” That's the kind of reaction I'm aiming for!What's the story behind your latest book?

My latest book started as a small exercise in a writing group, creating two people in a certain place. The two people were so interesting that I wanted to learn more about them. It suddenly fitted in with another idea that had been simmering at the back of my mind, and is now rapidly developing into a fully fledged novel. Of course, me being me, it has evolved into a three layered story set in three different timelines separated by thousands of years which all interlink. So what started out as a relatively simple modern fantasy quest has developed into a complex storyline. The closest I can think to describe it is Indiana Jones meets Lost without the island.